What is meant by castration or neutering?

Neutering and castration are the common terms used to describe the surgical procedure known scientifically as orchidectomy or orchiectomy. In this procedure, both testicles are removed in order to sterilize a male cat.

Why should I have my cat neutered?

Once a male cat reaches puberty, he will develop a number of behavioral changes that will make him a less desirable pet. He will become territorial and start to mark areas, even inside the house, by spraying urine. This urine has a particularly offensive odor that is difficult to remove. As the tomcat reaches sexual maturity, he will start to enlarge his territory, straying ever farther from the house, particularly at night.

"The longer a tomcat sprays and fights, the less likely neutering will stop these behaviors."

By increasing the size of his territory, he increases the likelihood that he will encounter other cats and get into fights for territorial dominance. The longer a tomcat is allowed to spray and fight (i.e., is not neutered), the less likely neutering will stop these behaviors.

Fight wounds can result in severe infections and abscesses. Diseases such as FIV and FeLV, which cause immunosuppression and AIDS-like syndromes, are spread through cat bites. These incurable diseases tend to be more common in non-neutered male cats. Last, but not least, humane societies and animal shelters are overrun with unwanted kittens and cats, and neutering decreases the number of needless deaths.

When should I have my cat neutered?

In most cases, it is recommended to neuter your cat before the onset of puberty. Puberty normally begins between six and ten months of age. Many veterinarians recommend castration at around five to seven months of age, although it is becoming more common to perform this procedure at an earlier age, such as two to three months, in an attempt to control pet overpopulation. Please contact your veterinary hospital for further details regarding their specific sterilization recommendations.

What does the operation involve? 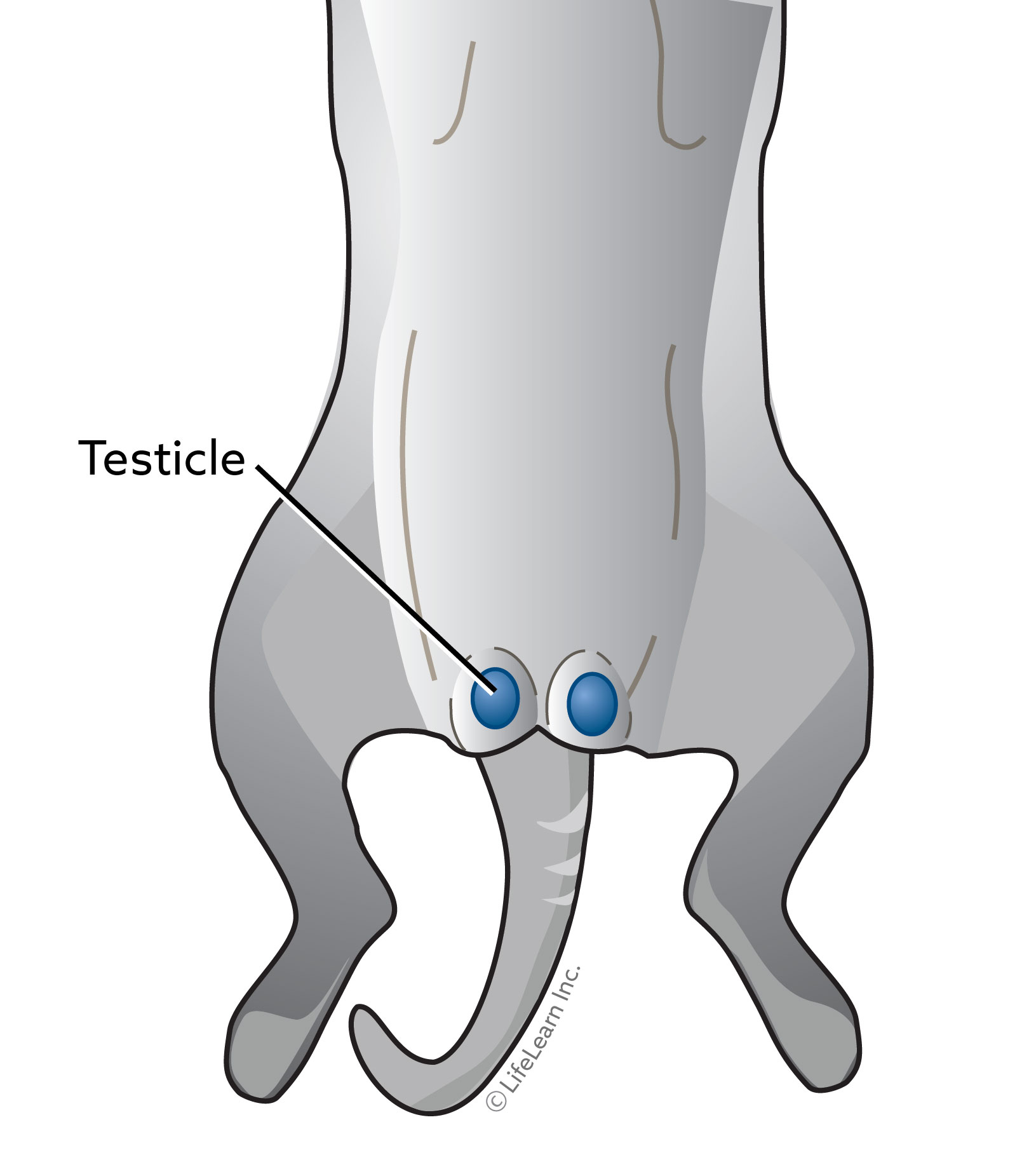 Your cat will undergo a general anesthetic.

"Your veterinarian will advise you how long to withhold food and water before surgery."

You will need to withhold food prior to the procedure; your pet should have free access to water during the fasting period. Your veterinarian will advise you how long to withhold food before surgery.

In male cats, both of the testicles are removed through small incisions in the scrotum. Since the incisions are very small, and since stitches may cause irritation of the sensitive skin of the scrotum, it is rare for the incisions to be sutured.

What surgical complications could arise?

In general, complications are rare during a castration surgery, however, as with all surgical procedures, there is always a small risk. Potential complications may include:

Anesthetic complications. Any cat can have an unexpected adverse reaction following the administration of any drug or anesthetic. Such cases are impossible to predict, but fortunately are extremely rare.

Another potential danger associated with anesthesia arises if the cat is not properly fasted prior to anesthesia. Anesthetized patients lose the normal reflex ability to swallow; during swallowing, the epiglottis, a cartilage flap at the entrance to the windpipe, closes and prevents food or water from entering the lungs. If there is food in the stomach, the cat could vomit while under anesthesia or in the early post-anesthetic period, allowing the food to enter the lungs and cause aspiration pneumonia, a potentially life-threatening condition.

"Pre-operative blood work is a useful screening test that may detect pre-existing problems that could interfere with the pet's ability to handle anesthetic drugs."

Illness will increase the risks associated with anesthesia. Pre-operative blood work is a useful screening test that may detect pre-existing problems that could interfere with the pet's ability to handle anesthetic drugs. If there are any signs of illness including sneezing, eye discharge, vomiting, or diarrhea, the procedure should be postponed until your cat has recovered.

To minimize the risks to your cat, it is essential that all pre-operative instructions are strictly followed and that you report any signs of illness to your veterinarian prior to an operation.

Post-operative infection. This may rarely occur internally or around the incision wound. In most cases, the infection can be controlled with antibiotics.

What adverse effects might castration have on my cat?

In the vast majority of cats, no adverse effects are noted following neutering. In certain cats, notably the Siamese breed, the hair that grows back over an operation site may be noticeably darker, believed to be due to a difference in the skin temperature. This darker patch usually grows out with the following molt as the hair is naturally replaced.

Does castration cause my cat to get fat?

Neutering does decrease the metabolism of your cat and may lead to a more sedentary lifestyle. This will cause your cat to put on weight; however, if you monitor their body condition and make appropriate adjustments to their nutrition and lifestyle – including regular exercise time – you can prevent this weight gain.